Releasing Ranjini: Why ASIO is wrong

Getup’s latest cause is the detention without trial of a Sri Lankan woman and her two small children.  The webpage “No Detention without appeal” says Ranjini and her six and eight year old sons have been detained indefinitely without charges for four days. 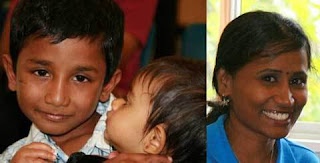 Ranjini survived the Sri Lankan war but her first husband did not and was killed in 2006. She arrived on a boat with her children on Christmas Island in 2010. From there they were moved to Leonora in WA, then Inverbrackie, SA in 2011, and finally to community detention in Brisbane.

Ranjini met Melbourne man Ganesh while he was in Brisbane on holiday late last year, and she moved to Melbourne with the children in order to wed him this year. The Department of Immigration verified her and the boys as refugees in September last year pending Australian Security Intelligence Organisation security clearance. If they could convince ASIO they could then obtain visas to enable them to stay in Australia.

After months of agonising wait, they fell at the last hurdle. On Thursday, Ranjini was told to pick up her kids from school in Melbourne and meet Department of officials. They had bad news for her. ASIO had done a security assessment on her and came up with a negative assessment. They put Ranjini and the children on a plane to Sydney and sent to Villawood detention centre. They are there indefinitely and have no right of appeal.

Media reports have not reported the surname of Ganesh or Ranjini. The Age said they got married last month with the approval of the Department of Immigration. The boys were enrolled at Mill Park Primary School. Ganesh told The Age he was allowed only five minutes to chat with them before they were taken away. "We were happy and the kids were even happier ... we wanted to start new life with hope. But now we are shocked...We are separated. There has been too much pain before. Are we going to be put through the same pain in Australia as well?"

On Friday Ganesh flew to Sydney and sent a text back to a family friend in Melbourne that the trio were okay but he didn’t understand why they were detained.  Now in Villawood, ABC Lateline says Ranjini and her family face a bleak future. “They and 46 other refugees with negative ASIO assessments are locked up indefinitely with no right of appeal,” Lateline said on Friday. “This morning one of the refugees attempted suicide at a detention facility in Melbourne.”

The program quoted the Refugee Action Coalition who spoke of fellow detainee Kumar who has been in detention for 35 months and was turned down by ASIO a year ago. With no recourse to legal means to end his incarceration and return to Sri Lanka impossible, the 36-year-old  Kumar attempted by hanging at the Melbourne immigration transit accommodation centre. He was dropped down by fellow refugees who found him at around 1.30am this morning.  He was the second inmate in a month to attempt suicide at the same facility.

Currently there is no right of review or appeal against ASIO findings. The indefinite detention of ASIO negative refugees is the subject of a complaint by Australian refugees to the Geneva UN High Commission for Human Rights. The Australian government has been given until July to respond to a complaint. A Parliamentary Committee has also recommended that there should be an appeal process in a damning report on mandatory detention and Getup called it a basic principle of justice.

A UNHCR policy document on Australia’s mandatory detention policy and reluctance to release asylum seekers to alternative measures has nothing to do with national security concerns either. On 22 August 2002, the Parliamentary Joint Standing Committee on Foreign Affairs, Defence and Trade asked the ASIO Director-General about the security screening of asylum seekers and learned that out of 5,986 screenings conducted since 2000, not one posed a national security risk. The same Committee also heard no evidence of a statistical linkage between asylum seekers and criminality (other than immigration violations).

But Ranjini, Kumar and the others have few political supporters in an era where a crude call to “stop the boats” is an electable mantra. Governments from Howard onwards have tried to demonise asylum seekers and maintain a wall between refugees and public sympathy. Crucially Getup has photos of Ranjini and the boys with which to humanise this campaign.  The test for Attorney-General Nicola Roxon will be to humanely deal with these cases without creating an electoral wedge for Labor’s already badly beaten back.  I don’t always agree with Getup, but they are right on the money with this. “No matter what,” Getup said. “We mustn't allow anyone - let alone children - to be detained indefinitely without charge, trial or appeal.”
Posted by Derek Barry at 11:19 pm

Thanks for the update and link to GetUp!.
This is simply state sanctioned kidnapping. It doesn't matter how the security sheeple sugar coat it, a mother and her two children have been taken for no disclosed reason and placed indefinitely in a cage.
It is truly disgusting.

Can I please have the link so i can sign the petition too?