Pew finds the young are deserting blogging for social media 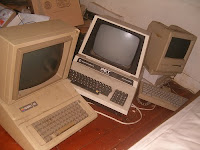 A new report from the Pew Internet and American Life project has found blogging has dropped among teens and young adults while simultaneously rising among older adults since 2006. The findings suggest that as blogging has matured as a practice, so has its practitioners. The survey was conducted as one of a series of reports undertaken by the Pew Research Center to highlight the attitudes and behaviours of American adults ages 18 to 29. The report brought together recent findings about internet and social media use among young adults and situated it within comparable data for adolescents and adults older than 30. Pew surveyed 800 adolescents and 2,253 adults in 2009 to get their data. (photo:eurleif)

The report found the Internet is a crucial “central and indispensable element” of the lives of American teenagers and young adults. 93 percent of teens between the ages of 12 and 17 went online, a number that has remained stable for three years. Nearly two-thirds of teen internet users go online every day. Families with teenage children are also most like to have a broadband connection (76 percent and up 5 points since 2006). It will probably surprise no one that the older you get, the less likely you are to be connected to the net. 74 percent of adults use the internet. But that number is skewed because younger adults (18-29) go online at a rate equal to that of teens (at 93 percent).81 percent of adults aged 30-49 are online while just 38 percent (but still rising) of those over 65 are hooked up.

Use of gadgets is on the rise as the Internet increasingly moves away from the desktop and onto mobile and wireless platforms. But again the growth is skewed towards the young. In September 2009, Pew asked adults about seven gadgets: (however they listed just six: mobile phones, laptops and desktops, mp3 players, gaming devices and ebook readers). On average, adults owned just under three gadgets. Young adults of age 18-29 averaged nearly 4 gadgets while adults ages 30 to 64 average 3 gadgets. But adults 65 and older on average owned roughly 1.5 gadgets out of the 7.

While the desktop or laptop remains the dominant way of getting online, newer ways of connecting are making headway. More than a quarter of teen mobile phone users use their cell phone to go online. A similar number of teens with a game console (PS3, Xbox or Wii) use it to go online. One in five owners of portable gaming devices uses it for Internet access. Perhaps surprisingly white adults are less likely than African Americans and Hispanics to use the internet wirelessly. African Americans are the most active users of the mobile internet, and their use is growing at a faster pace than mobile internet use among whites or Hispanics.

Less of a surprise is the fact that teens are avid users of social networks. Three quarters of online American teens ages 12 to 17 used an online social network website, a statistic that has been growing at 7 percent each year since 2006. Teenagers are also more likely to use it as they get older. While more than 4 in 5 online teens ages 14-17 use online social networks, just a bit more than half of online teens ages 12-13 say they use the sites. Pew says this may be due to age restrictions on social networking sites that request that 12 year olds refrain from registering or posting profiles, but do not actively prevent it. The other notable statistic is that differences in gender are evening out ending the previous dominance of girls on social networks.

Usage of social networks stays constant in the 18-29 age group but then drops off rapidly for those over 40. Adults are also more likely to have profiles on multiple sites. Among adult profile owners, Facebook is currently the social network of choice; 73 percent of adults now maintain a profile on Facebook, 48 percent are on MySpace and 14 percent use LinkedIn. Analysis by education and household income show that support for Facebook and LinkedIn rises with both factors validating Danah Boyd’s research into the subject.

The news is not so good for Twitter. Pew’s September 2009 data suggest teens do not use the microblogging platform in large numbers. While one in five adult internet users ages 18 and older use Twitter or update their status online, teen data collected at a similar time show that only 8 percent of online American teens ages 12-17 use Twitter. Pew did add a rider to say the question for teens was worded quite differently from how the question was posed to adults so the results are not strictly comparable. With adults there was a sliding scale of Twitter usage with age. 37 percent of online 18-24 year olds use the platform compared to just 4 percent of over 65s.

But while use of all other web2.0 platforms was on the rise among the young, the striking exception was blogging. Teenage blogging has dropped from 28 percent to 14 percent of all users in the last three years. The decline spreads to commenting on other blogs. 52 percent of social network-using teens report commenting on friends’ blogs, down from 76 percent commenting in 2006. Young adults show a similar decline. However blog as a whole had not declined as there has been a corresponding increase in blogging among older adults. The hard work involved in blogging is increasingly becoming an old person’s game.
Posted by Derek Barry at 9:17 pm