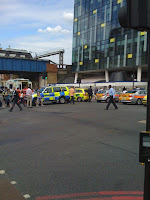 As Londoner Joe Neale has just found out, News Corp wants to charge for content on the Internet while not being averse to using other people’s content for nothing.

Joe's story began two weeks ago on 5 August with events that seemed to have nothing to do with him. On that day two police officers from Kennington police station in London were patrolling near Waterloo station when they stopped to question a man on a bicycle. As the officers approached him, the man dumped the bike and ran away. As he did so, he fired shots at the officers leaving two of them injured in the vicinity of Southwark tube station. It was Joe Neale's fate to be walking past the tube station at the time. He snapped a picture of the crime scene (see photo above) which he immediately loaded to Twitpic with the caption “Holy crap police man shot at Southwark tube station!”

Neale had to rush to meetings so did not immediately notice that others were paying close attention to his picture. The shooting of two policemen in London is meat and drink for News Corp's Sky News and they were quick to publish an article about it. They found Neale’s Twitpic and used it to illustrate the story. Sky captioned the photo with the credit “Joe from Twitter”.

But it turns out that Joe is not just anyone from Twitter. Neale is the original @joe on Twitter with 20,000 followers and is the head of End User Programmes at software licencing company Symbian. Sky could have found all this out by looking at his Twitter page. There they would also have found out he is a former Murdoch employee. Neale’s previous job was MySpace UK Content Manager. This meant he knew who to talk to in News Corp.

Friends of Neale told him that Sky was using his picture. His first reaction was one of delighted amazement. Neale sent a couple of tweets to Jon Gripton, news editor of Sky News Online saying he was “really pleased” Sky had used the photo. He asked them to change the attribution from “Joe from Twitter” to “Joe Neale http://www.twitter.com/joe”. Gripton responded after 5 hours saying “Will do Joe - give me a minute to talk to the team”. Gripton also requested Neale to follow him in Twitter so that he could send him a direct message. Neale appreciated the response and asked jokingly “how many beers” the picture was worth. A day later the pair were following each other but Neale complained he still had not yet gotten an email response.

Sky changed the attribution but were in no mood to divulge how many beers they thought it might have been worth. But Neale was no longer joking and found out for himself. He checked the terms of service of Twitpic which specifically said "All images uploaded are copyright © their respective owners". He sent Sky several emails but got no response. But after two weeks of silence from Sky, Neale hit back using the power of social media. Two days ago on Wednesday 19 August, Neale published the content of the email on Twitter using the #skypic hashtag. Part of the email read as follows:

My photo was used without permission on the sky news website on the 5th of August 2009, and was taken from my Twitter feed without my permission(I have 20000+ mainly UK based followers including a large section of press/media folk).

Neale went on to tell Sky the conditions he demanded for using the photo without permission. It would be £300 for the initial use on the front of the site and then charged at five percent for each of the two weeks it was used by the site (note: Neale's picture has now been removed from the Sky report of the shooting linked above in the first paragraph).

To hammer home the point, he sent out further tweets using the tag #skypic, which read: “Newscorp use your photos without permission but have plans to charge for reading their content” or “Newscorp vs citizen journo”. Neale’s network got involved and put out 200 retweets of #skypic.

After 24 hours, Sky caved in and promised to pay £330.75. The promise came in an email they sent Neale yesterday which read: “I’m sorry my colleagues didn’t get back to you as soon as you would have liked. We always acknowledged your copyright, & I’ve forwarded on your invoice for payment – here it is attached with the relevant SY number inserted in case you’ll need that if you need to chase it up. Just be aware that payment should take approx one month to get through the system.”

The game is not over till the cheque is in Neale’s bank but for now the score is Citizen Journo 1, News Corp 0.
Posted by Derek Barry at 3:13 am