Rabbiting on about Hervey 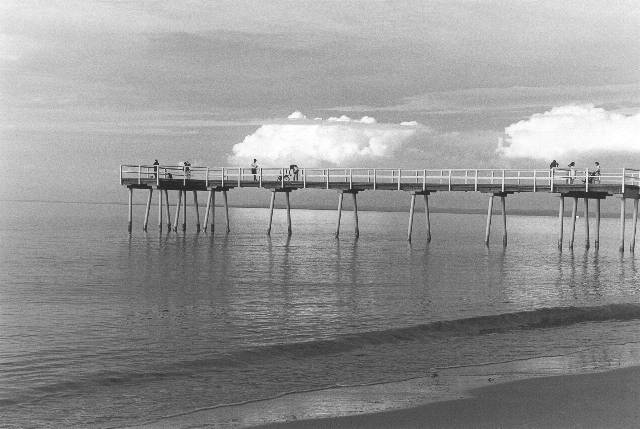 Hervey Bay was part of Captain Cook's naming frenzy during his 1770 navigation of the East Coast of Queensland. Hervey is pronounced Harvey and is an amalgam of small seaside villages. Cook named the bay for the 'English Casanova', Augustus John Hervey, the 3rd Earl of Bristol and a sailor of some note who acquired a formidable reputation as a womaniser (his successes included the deflowering of no less than a dozen Portuguese nuns.)

Cook thought Fraser Island was joined to the mainland just as he thought the same of Bribie Island when he named the Pumicestone “River” (now the Pumicestone Passage.) The 122km long Fraser Island was named for the shipwreck victim Elisa Fraser. Elisa was an English migrant who survived a lot more besides shipwreck
before she got to the Australia she was expecting. Including a time spent as a ‘houseguest’ of a local aboriginal tribe.

Nowhere nearby is the Iguacu Falls. They are on a picture on a wall in a Hervey Bay travel agent. They lie on the border between Brazil, Paraguay and Argentina on the Iguacu River before it joins up with the Parana. The falls are taller than Niagara though they have seasonal variation. The name Iguacu comes from the Guarani (a local Indian language) words for water (y) and big (guasu.) Maybe some day.

Woolly Days passes by a tennis court and ponders on the scoring system. Clockface: 15, 30, 45, 60. A nice round number to the denizens of the middle ages. 45 is elided to 40 over time to save breath. And love is precisely that, those who have no points play for the love of the game. It was originally called ‘jeu de paume’ (palm game). The server would shout out ‘tenez’ before serving. As for deuce, its from Middle French deus, accusative masculine of duo, two. What the deuce is he up to now? It doesn’t explain why there is a ‘w’ in two.

Walked onwards and passed by the dentist Dr Spike and came here to the Chinese restaurant with a buffet advertising
“All You Can Eat Children under 12 Take Away”.

I wasn’t sure if I could eat twelve children at a setting anyway. Depending on age and weight one child might be sufficient with maybe one more for take away. But hunger overcomes fear of cannibalism and I walk inside. The food is no false argument despite the kidding sentiment. I’m doing the $12.35 banquet proud….as are lots of under twelve are, The chicken and sweet corn soup, I’m sure even dental doc Spike would approve of. You see I haven’t been eating well these last few days.

You understand the world in a certain way so be that way. I am in Hervey Bay to fulfil a six year dream to visit Fraser Island (gathering dust on my doorstop for so long) wondering if I’ll be disappointed. Of course I’ll be with an attitude like that. I will have to feel its wonder take it and crown my tomatos in rows of thorns. Rouse me from my subtle slumbers. Its not for long now that I’m here so reiki kitty turkey beach!
Posted by Derek Barry at 11:40 am