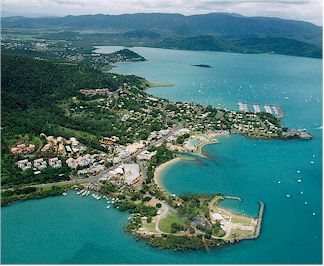 “Look out for the man’s bag, it contains all horrors” was the unknown cry from the TV. And indeed it proved an ominous warning, for as well containing all horrors, its contents might possibly also include one stolen blanket.

I was staying two nights in the backpackers at Airlie Beach in North Queensland. It was a dormitory style room with six beds. Mostly full of young Europeans. I brought a blanket with me and left it on the bed on the first morning as a symbol that this bed was claimed. I went out for the day on a boat to discover Whitsunday Island and enjoyed the beautiful white sands of Whitehaven beach until it became akin to a Normandy landing and was besieged by a flotilla of tourist boats. Sigh.

I came back to Airlie tired and slightly sunburnt. Time for a quick nap before the evening. There were two people in the room. One of them was on my bed. My blanket was gone.

Bummer, I liked that blanket and its jaunty yellow and brown sungod patterns. More to the point I paid $60 for it. The English backpacker now occupying the bed was lazily watching TV. I'm sure he would have felt uneasy by the darting startled looks I gave him when I saw him in what I had assumed to be my bed. Or by my furtive looks around the room. It did not help the situation that I never bothered explaining the nature of my search to him or his mate in the other bed.

So who stole it? I had to rule myself out as a suspect first. Maybe I only imagined I left it on the bed. I did a quick check of the likely places. Under the bed, under the table, under the pillow (a bit desperate to think that a blanket would fit under a pillow) then looked in the car and the boot without success. In the boot, my heart briefly rose when I saw a snatch of the right colours crumpled in the back of the boot. But it was only the matching pillowcase, not the blanket. I went back to the room and checked the nooks and crannies once more. No, I had to admit the sheet was gone, and the bed made vacant by that lack of propriety I had investing in it by virtue of leaving my favourite sheet on the bed.

Who, then, was responsible? Not these boys surely, they would hardly have taken a sheet and then slept on the bed they stole it from? Unless, they didn’t think they were nicking something perhaps in their minds the last tenant had left it there. There were actual two signs of my ex-ownership missing – the sheet and a half full bottle of water which was also half empty. Both were gone.

No, I don’t believe it was these guys and I didn’t want to bother them with my problem “Hey was there a blanket on this bed?” not being one of the great opening liners to begin any discussion. So, that left either the people who were here last night or the cleaners. I could easily follow up the latter and trust in the possible good motives of the former (“Hey, someone may have left this behind, could you look after it for him – Sure, just leave it at the front desk”).

And so the front desk is where I go straight away. Excuse me, I said politely, Did anyone leave a blanket for Room 18? And no, no-one did. Front desk did, however, suggest that I contact Housekeeping and take up the matter with them, a very different branch of the organisation.

Housekeeping were part of the daytime Petty France (degonfler) and by God they were gone from the premises and weren’t expected back until 7am tomorrow morning. The matter was adjourned until then. In the meantime I had plenty of space in which to draw unsuitable conclusions. Let’s take the four other houseguests from last night.

Two girls, two boys. The girls, one of which named Bethan was having a birthday today were with one of the boys. I could not tell which was Bethan, they both seemed the birthday type. The other boy was travelling solo and said nothing during the previous evenings phase.

The four went out till late. The solo boy returned first followed by the other boy followed by the two girls around 4am. There was no morning phase. I simply upped and walked away after a toilet and shower. The others were all asleep when I left. I left my blanket there to mark my territory of the bed I planned to return to in the evening and also because it was too damn convenient to leave it there rather than return it to the car.

That action initially cursed by sloth was now deified for its apparent insurance caveat. Yet it now appeared too trusting. But I cannot indefinitely pin the blame on myself. Some other culprit exists because as sure as hell I know my lack of conscience doesn’t have the sheet. The H Blanket, where are you?

I prepare myself for my 7am assault on the Housekeepers, whoever they may be, and sleep on my reserve bed with my reserve sheet, a bright yellow creation of the hostel’s creation. This is a cheap vanilla sop, a sympathy gesture from the Front Desk in lieu of something more personal and expensive.

Off to sleep I go and dream of blanket-thieves. The morning arises and with some time to spare before seven, I resume my quest at the Front Desk where I hope optimistically that a change of personnel might bring a different answer.

It doesn’t, perhaps I should try Housekeeping, they confirm. They did mention one crucial new bit of information, Housekeeping have already arrived and could be found ‘in their cage’. A fellow worker takes issue with Mr Front Desks use of the word cage to describe Housekeeping House. “Are they caged up?” she asks. “Of course” he replies.

I waste no further time on the dungeon status of Housekeepers and seek them and their cage aux folles. I find the cage ajar but the Housekeeper has not escaped. She is still inside folding towels. I say hello and discuss my dilemma. I come armed with the matching pillow case from the boot in an effort to jog her memory and make it easier for me to describe the blanket.

The colours and pattern look like this, I tell her as I point to the pillow case. The slight desperation of the appeal must have shone through as although she quickly informed that they had not seen the fabled sheet, she promised to seek out yesterday’s housekeeper of Room 18 to see if she had seen the sheet.

She told me to come back in a few minutes after which she would have the answer. I walked down the street and broke ten minutes on the back of a newspaper. When I returned I found the cage distressingly empty. Warning, warning, wild housekeepers on the loose! They will eat the contents of your bed as soon as your back is turned! Here, little housekeeper, won’t you come back to your cage?

I do a couple of fruitless loops of the compound before I spot her darting behind the swimming pool. I catch up with her and ask the question. The news is glum. No, yesterday’s housekeeper hasn’t seen it either. Bugger, must have been the boy on his own or one of the birthday cohorts or their male escort. Or someone else entirely.

I’ll never know which man's bag now has my Manchester. I kept the hotel's daggy yellow sheet as scrawny compensation and drove south, vaguely dissatisfied.
Posted by Derek Barry at 10:33 am