The story of New Geneva Barracks 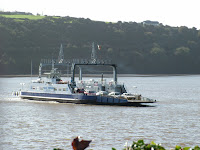 Despite their close geographical proximity, the south eastern Irish counties of Wexford and Waterford have not always shared a close heritage. The two are separated by the broad expanse of Waterford Harbour and there are no bridges between them. Only in recent times have the two been linked up with the opening of the car ferry between Passage East in Waterford and Ballyhack in Wexford. But when Wexford rose in rebellion against the English in 1798, the county across the harbour remained quiet. Waterford’s only real link to the rebellion is a building just outside Passage with the unusual name of New Geneva Barracks.

In the late 18th century, Ireland was in a rare period of prosperity as Britain temporarily relaxed customs duties. In 1783, the new Irish parliament in Dublin was determined to fund a colony from Geneva who wanted to settle in Ireland. They were Protestants who wanted to leave their homeland after an unsuccessful rebellion against their Catholic French rulers. The Irish parliament voted £50,000 pounds to buy land and build a town to house the immigrants. The sum was increased by £6,000 pounds and land set out in the barony of Gaultier (east Waterford county) in 1653 for the support of Duncannon Fort (across the river in Co Wexford). These tenanted lands near Passage East were owned by the Alcock family, one of whom was MP for Waterford city. The government bought out the land from the Alcocks for £12,400 and compensated the tenants. They then began building with the intention of accommodating 1,000 Genevans. The public reason for bringing them over was to build a body of skilled merchants to give impetus to trade and commerce in the city of Waterford and the nation as a whole.

But there were ulterior motives. Authorities secretly hoped the Swiss Protestant ethos might infect the local Catholic population. Earl Temple, Lord Lieutenant of Ireland, wrote a letter to Grenville, the Chief Secretary, where he noted putting the Swiss in Waterford “might make an essential reform in the religion, industry and mores of the South who want it more”. This also meant setting up an educational establishment. The government wanted to establish a Genevan College but needed to keep it secret from the governors of Trinity College who had a monopoly on education.

But the Trinity governors never had to worry as the mission failed before it began. An advance party of Genevans arrived in Waterford determined to set up a silk industry. Work on the New Geneva site proceeded but concession talks between the Irish government and Genevan leaders broke down over persistent Swiss demands the government felt were unreasonable. The whole arrangement fell through, the Genevans returned home and the buildings were left derelict.

With the threat of an uprising in 1798, the Government took possession of New Geneva, raised the compound walls and provided accommodation for 1,500 soldiers. When fighting broke out in Wexford, Waterford remained peaceful. However the Government was uneasy if the United Irishmen had triumphed in New Ross, the nearby city and county of Waterford would have risen. The soldiers of New Geneva were suspicious and showed great cruelty towards locals. More than a century afterwards, the memory of the 1798 cruelties and outrages lingered among the people and New Geneva was to them a symbol of tyranny and oppression.

In Watty Cox’s Irish magazine for February 1816 there was a vivid account of the “blanketing” of a woman at Geneva Barracks in 1798. A Mrs O’Neill had travelled from Co Antrim to see her son imprisoned at the barracks. By bribing sentries she was permitted an interview but as soon as mother and son saluted each other, she was ordered into the presence of Colonel Scott and his wife. The couple subjected her to a rigorous examination and then handed her over to some highlanders for a “blanketing”. Blanketing was a common punishment whereby the soldiers would grab a blanket, strip the victim naked and hoist her in the air repeatedly. Mrs O’Neill suffered this indignity for more than 20 minutes. She implored soldiers to leave some clothes on but when Col Scott saw this departure from custom he was encouraged by his wife to cut off her clothes with his sword. The inhabitants of the area could see her naked body repeatedly rising and falling above the walls of the barracks. Afterwards the woman was taken to a neighbouring village where she died the next day. The fate of her son was not recorded. 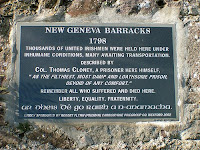 Today all that remains of Geneva Barracks is a dilapidated farmhouse and the remains of watch towers erected in 1798. In the 19th century the lands passed to Lord Waterford who sold them to a local merchant. This man named Galwey dismantled the barracks and moved the stonework to augment his premises in Dungarvan. A marker now commemorates the Geneva site with a prisoner's description of the barracks as “the filthiest, most damp and loathsome prison, devoid of any comfort”. It is also remembered in James McBurney’s The Croppy Boy (which featured in James Joyce’s Ulysses) the last verse of which reads:
At Geneva Barracks that young man died
And at Passage they have his body laid
Good people who live in peace and joy
Breathe a prayer and a tear for the Croppy Boy”.
Posted by Derek Barry at 12:41 am

Great article. I went down there recently expecting a complete ruin. Thanks for the insight
P.