The fourth siege of Waterford 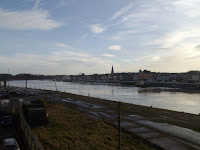 The ancient Irish city of Waterford has seen and survived four major sieges in the last millennium. Each siege left its mark on the city and on the course of Irish history. The first siege in 1170 raised by “Strongbow” the Earl of Pembroke, hastened the beginning of English rule in Ireland. Barely two years later King Henry II would arrive in the city to claim the land for the crown of England and seek obeisance from all the Irish kings and bishops. The second (and only unsuccessful) siege occurred in 1495 when forces led by the Earl of Desmond attempted to foist Perkin Warbeck on the people as the pretender to the English throne. The resistance of Waterford earned it the motto “urbs intacta manet” ("remains the untaken city") from another grateful King Henry, the seventh. The third and longest siege was during Cromwell’s Irish reign of terror. For almost a year, his armies isolated the city and thousands died of starvation and disease before General Ireton accepted its exhausted surrender in August 1650.

The fourth and final siege came in the warm summer of 1922. While the weather may have been glorious, this was a mean and tragic time for Ireland as it cut itself to pieces in a murderous civil war. The new Free State government besieged Waterford in its campaign to defeat the rebels in the aftermath of the divisive treaty with Lloyd George’s government in Westminster. The odds were stacked. The Free State army had modern artillery and the support of the powerful organs of the church, the press and the captains of Irish industry. However, the defenders did have military expertise as the majority of the IRA’s officers supported the anti-Treaty forces. It was the south of Ireland which bore the brunt of the conflict and Waterford’s turn began on 18 July.

A West Waterford man named Pax Whelan led the Anti-Treaty forces in the city. They were poorly organised and content to wait for the attack. No attempt was made to secure the heights above the city north of the river. Anti-Treaty forces were instructed to operate independently in their own areas leading to slipshod communication and there was no overall plan. By contrast, the Free State side was much better prepared. It was led by former American cavalry officer Colonel John T. Prout assisted by two local men Paddy Paul and James McGrath. Paul was a gunnery officer in WW1 and then joined the IRA as brigadier of East Waterford. Paul and his enemy Whelan had worked together during the War of Independence and the pair led the only attack on British forces in Waterford: the unsuccessful ambush at Pickardstown near Tramore in January 1921.

But at the end of that war, Paddy Paul opted for the Free State side. The new government in Dublin struggled to enforce its authority and on 22 May 1922 they sent Paul with orders to take command of Waterford and secure the barracks. On arrival in town, he was arrested by anti-Treaty forces. Paul was injured in the arrest but later managed to escape from the Infirmary Hospital dressed as a nun. He fled back to Dublin to plot the re-capture of Waterford.

By 18 July he was back on top of Mount Misery overlooking the attack of his native city. It would not be easy. All approach roads were mined. The rebels were reinforced by volunteers from Cork and Kerry and had seized the barracks and fortified Ballybricken jail. They set up outposts in shops and hotels along the quay, the post office and Reginald’s Tower. They also opened the spans on the road and rail bridges across the Suir. They outnumbered their opponents with 700 defenders in the city facing 550 Free State troops, many of whom had served in the British army. But the Free Staters had power on their side: two artillery pieces including an 18 pounder placed over the railway station and one lighter calibre piece. The 18 pounder was initially hamstrung as it faced rapid fire from the quays and a sniper on Ballybricken hill but would eventually prove to be a devastating difference.

All businesses in the city closed down except for the Tramore railway which operated continuously through the four days of the siege. Most townsfolk took advantage of the sunny weather to evacuate to the seaside until the fall of the city. At 6:45pm on Tuesday 18 July the attack began in brilliant sunshine. Paul’s first shell landed near his own home near Brewery House in Newgate St. His mother was working in the kitchen and narrowly avoided injury. But the majority of shells found their mark landing in Barrack St or near Ballybricken jail.

The guns blazed away for four or five hours of firing on the first night. The eerie silence was shattered again at 6am the following morning as the guns opened up in excellent visibility. There were many direct hits on the barracks and the jail on top of the hill. Whelan moved his sharpshooters to Bilberry cliffs west of the quay and they managed to keep the attackers pinned down. The defenders inflicted heavy casualties from accurate machine gun fire from the post office on the quay with garrisons under the command of Ballybricken chemist Pierce Power. But the shelling continued all day.

During a lull in the fire, Prout moved his major artillery piece onto the bridge but was prevented from using it by persistent gunfire from across the river. Prout had to come up with an alternative plan. The following night 150 men led by Captain Ned O’Brien moved down the Rosslare railway to Giles Quay under the cover of darkness. O’Brien’s day job was a journalist for the Waterford News but now he was making the news not reporting it (he would later be killed on patrol in the city). His forces commandeered boats moored at the quay and rowed to the opposite shore. They encountered no resistance and suddenly the back door to the city was wide open.

At Newtown school, they encountered a motorised Anti-Treaty patrol. The attackers quickly captured the car and locked the occupants in the boot. They bypassed a rebel garrison in the park and found a prominent local Unionist known as “Lame” Dobbyn. Dobbyn was anxious to see the Republicans defeated and he gave the intruders the key of the Country Club on the strategic corner of the Mall and the Quay opposite Reginald’s Tower. The men entered the back of the building and overpowered a sleeping garrison stationed there. They had secured a vital corner of the city without firing a shot.

At 7:45am the next morning, they opened fire on the Tower across the road and also raked the Mall and the Quays with machine gun fire. The element of surprise gave Prout the opportunity he needed to secure the artillery on the bridge. Its gunfire from close range suddenly made the Quay garrison untenable. The republicans retreated to Ballybricken. When a direct hit exploded in the magazine of the artillery barracks that evening, the area had to be evacuated. The end was near.

Pax Whelan gathered his Dungarvan, Cork and Kerry units to escape to the west leaving Jerry Cronin in charge of a small band to defend the city. Cronin's men retreated to Ballybricken Hill to fight the final battle for Waterford. At 11:50am on Friday 21 July 1922, shellfire breached the jail walls. After some bitter hand-to-hand fighting, Cronin’s forces surrendered. The fourth siege of Waterford was over. 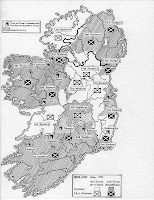 The rebels were dispatched to Kilkenny and Newbridge jails, none of them taking up the offer to join the Free State army and swear allegiance to the Provisional Government. Prout spent the weekend in an open car with Paul and McGrath touring the city. The two local men were able to point out Republicans who had escaped arrest. The civil war would drag on for almost another year in West Munster. On 24 May 1923 anti-Treaty leaders issued unceremonious orders to “dump arms”. The civil war was over. By its end 3,000 people were dead, and 21,000 prisoners were in jails and internment camps. The war left a legacy of bitterness that infected the Irish polity for decades to come.
Posted by Derek Barry at 9:32 pm

My mother would have been 10 at the time and told a wonderfully colourful story of the family being bundled into the pram and taken out for the day. As they lived close to the barracks I presume it was when the evacuation took place. She mentioned a place called Larrys Knock which I took to be a place overlooking the town

I'm currently working on a graphic novel based on the death of liam lynch and the irish civil war with emphasis on the seige of waterford. I found this artical an invalable source in my research

there seems to be an increase in interest and discussion about this period of irish history. i suspect that this is because enough time has elapsed for old wounds to heal and previously little known stories to be told

My Mam lived in New Street which was fairly near the Barrack's. She was 7 at the time and was told to go under the kitchen table for shelter. Larry's knock is the same place as Mount Misery.