Today Al Jazeera announced Mahmoud Ahmadinejad, the Iranian president, has started his own blog. Iranians found out about this after it was announced on state TV on Sunday and they urged members of the public to send the president written messages through the website.

Ahmadinejad’s blog can be found here and as well as the Farsi version there are US, Saudi and French flags which link to translations in English, Arabic and French respectively. His front page contains a mini autobiography which, after a brief prayer commences with “During the era that nobility was a prestige and living in a city was perfection, I was born in a poor family in a remote village of Garmsar-approximately 90 kilometer east of Tehran.” Ahmadinejad wrote about how Ayatollah Khomeini began to appeal to him when the ayatollah was in exile during the 1960s and 70s. As well as criticising the Shah, he criticises the US and discusses the 1980-88 war with Iraq, when he served in the elite Revolutionary Guard. He called Saddam Hussein, the former Iraqi president, the "aggressor" and wrote that international organisations tried to "distort and hide the facts that Saddam was the aggressor and that the arrogant powers had fully supported him". Ahmadinejad's government have arrested and pressurised some bloggers as part of a wider internet clampdown launched after he became president last year. Mohammad Ali Dadkhah, a prominent human rights lawyer, estimates that at least 50 bloggers have been detained in the last 12 months.

Internet censorship in Iran is amongst the most restrictive and sophisticated in the world and much of the filtering technology in use was developed by western companies. Studies done by a partnership of Western universities found that 34% of the 1465 URLs they tested were blocked, including 100% of the pornographic websites tested. Many gay and lesbian web pages were blocked, as were those hosting politically sensitive content - 15% of blogs and 30% of news sites were inaccessible. Sites providing tools and information for circumventing filtering technology were also blocked in 95% of cases. The researchers say Iran mainly employs a package called SmartFilter, developed by US company Secure Computing. However, Secure Computing told New Scientist that Iran’s state-controlled ISPs are using the company’s software without permission. "Secure Computing has sold no licenses to any entity in Iran," says spokesman David Burt. "We have been made aware of ISPs in Iran making illegal and unauthorised attempts to use of our software.”

The 2005 study from the multi-university OpenNet Initiative (ONI) called "Internet Filtering in Iran," documented the degree and extent to which the Iranian government controls the information environment. Iran has successfully adopted an extensive filtering regime at a time of extraordinary growth in Internet usage among its citizens, as well as a tremendous increase in the number of its citizens who write online in Farsi. ONI's research shows that Iran is among several countries in the Middle East that focuses its censorship efforts on expression through local language. 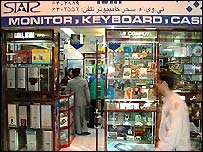 The report showed that Farsi sites were more likely to be blocked than comparable sites in English. Individuals who subscribe to ISPs must promise in writing not to access “non-Islamic” sites. There are approximately 5 million Internet users in Iran and the country is starting to deploy Broadband widely. The Internet is the most trusted media outlet in Iran and thus explains why Ahmadinejad is appealing to his people in this fashion. However the state has demonstrated its commitment to a censorship regime that keeps up with the technology.
Posted by Derek Barry at 7:44 pm